Busan sits on the southeastern coastline of the Korean Peninsula. It is a 2 ½ hour train ride from Seoul and a short flight from Tokyo and Beijing. South Korea‘s second largest city and largest port spread out along Yeongnam Region Coastline. From the dockyards to the Jagalchi Fish Market to the shellfish, Busan has for long been linked to the ocean.

Busan has continued to evolve into a place where Koreans can peer into the future, reflect on the past, and let their hair down. While the port underpins the economic vitality of Busan, it is the beaches in the city which continues to draw travelers from different parts of Asia. Here are the top must-see attractions in Busan, South Korea. 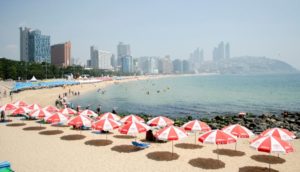 Haeundae Beach
Haeundae Beach is Busan’s star attraction and South Korea’s best-loved and biggest beachside hangout. Nearby is the Dal Maji Hill which provides an outlook for coffee lovers and wandering poets will adore. Also in Haeundae is the APEC House where Pacific and Asian leaders enjoyed some of the most celebrated views of Busan during a summit in 2005.

Gwangalli Beach
The ever-changing coastline of Busan offers activities and scenery to match every mood. The Gwangalli Beach offers total relaxation and you can enjoy the views to Diamond Ridge laid back vibes as well as the gentle waters.

Cheongsapo
For those looking for adventure, you can join a charter at Chrongsapo – a fishing village or take in the spectacular views of the Oryukdo Islands by stepping onto the skywalk at the Yongho-Dong Peninsula.

Gijang
If you are looking for enlightenment, go to Gijang to make a wish at the Temple of Haedong Yonggunsa. It is one of the few Korea Buddhist temples built by the ocean.

Taejongdae Park
Head to the Taejongdae Park by crossing the historic Yeongdodaegyo Bridge. According to legends, it was at these cliffs, gods, and goddesses once relaxed and the King of Silla spent some of his leisure time. Taejongdae Park is the ideal place to slip into a slower state of mind.

Dadaepo Beach
Continue the meditative mood at Dadaepo Beach. The kids can run free or you can let your mind wander on this beach. At the mouth of the longest river in South Korea, the sea mists and endless sands blur the lines between the earth and heaven. 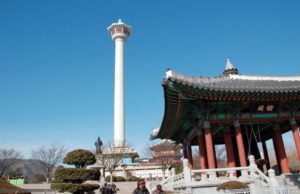 Yongdusan Park
While Busan has been shaped continually by the sea, it is also a city defined by its mountains. Ride the escalator to the Yongdusan Park summit and share the views with the statue of Admiral Yi Sun Sin – a sixteenth-century naval hero. Take a 20 minutes hike to the nearby Mt. Cheonma to the observation platform which allows you to see this dynamic city as it spreads out before you.

Geumgang Park
Geumgang Park is home to the highest peak in Busan. Join the locals who hike here every weekend, exploring the walls and forest trails of Geumgang Fortress. You will also find the Beomeosa Temple here. 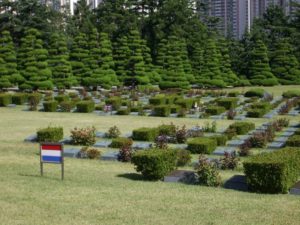 UN Memorial Cemetery
Busan was under siege in 1950. Visit the gravesites of thousands of troops who formed a perimeter around Busan to fight off North Korean soldiers at the UN Memorial Cemetery. After centuries of protecting its gates and decades of toil and hardship, Busan has come into its own. Today, this rollicking port town is a bridge that connects the past and future into something special.